PortMiami is remaking the city’s skyline 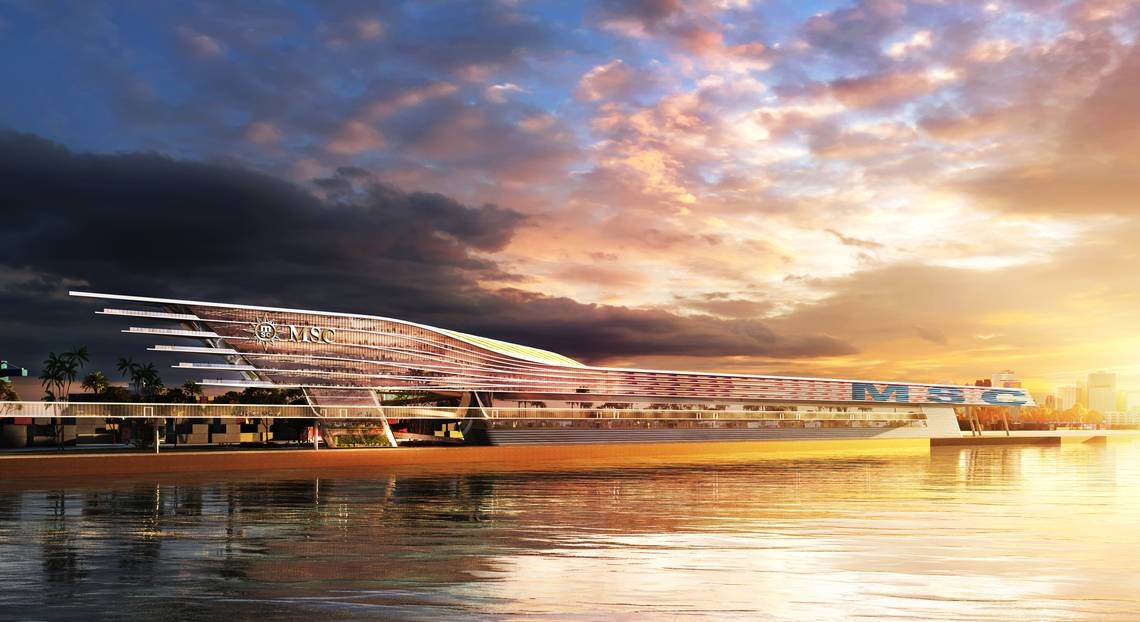 The view along the drive down the MacArthur Causeway from downtown Miami to Miami Beach is getting a new, 21st century look.

Nearby, Norwegian Cruise Line is building a curved terminal facing Palm Island. By 2021, a palm tree forest-inspired cruise terminal for Virgin Voyages will face downtown. Nearby, MSC is creating a winged $300-million headquarters — a final flag of PortMiami’s reinvention.

With a combination of public and private dollars, Miami-Dade County is betting on the cruise industry in a big way by devoting more than $1.5 billion to build five shiny new cruise terminals and two company headquarters in total, the most dramatic remake of the port in recent decades.

The new terminals — and the technology within them — will enable cruise lines to quickly embark thousands of passengers on their Caribbean vacations. But the overhaul brings more than a matter of speeding processes and increasing capacity. Together, they create a modern ocean entryway to a 21st-century global city known for art and design.

“The buildings convey a very forward thinking, progressive city,” said Bernardo Fort-Brescia, founding principal of Miami-based firm Arquitectonica, which is designing the MSC and Virgin projects. “They convey the importance of the port. They tell the story of what a big industry it is for the world what happens in Miami.”

NUMBER ONE
Since the modern cruise industry took hold in South Florida in the 1970s, the port of Miami has been a top launch point because of its proximity to the Caribbean. Less than 200 miles from Nassau, the city served as a hub for round-trip cruises to the Bahamas and longer island-hopping tours throughout the decades.

Over time, various port development projects have graced presentation boards — and then disappeared. Talk of a hotel and retail center has occasionally surfaced; a proposed soccer stadium was pushed onto the mainland. All the while, cruising from Miami became more and more popular.

But in the new millennium, PortMiami’s luster dulled. Its terminals could not accommodate the largest ships in the world, clocking in at over 1,200 feet long. In 2009, those ships — owned by Royal Caribbean Cruise Line

he industry snub served as a catalyst for upgrades — the boom in architecture the port is enjoying today. With it, the mega ships have returned and Miami has solidified its place as the busiest cruise port in the world.

“This is really an effort by our local elected leaders to make Port Miami Number One again,” said Juan Kuryla, director of PortMiami.

Mayor Carlos Gimenez said about $6 billion of Miami-Dade’s economy comes from the cruise industry, a number that is likely to grow given the investment in new port infrastructure and in the ever-increasing fleet of ships. “The new cruise terminal contracts recently approved by Miami-Dade’s Board of County Commissioners will help expand this key driver of our economy,” he said.

In 2019, 6.8 million people cruised from PortMiami, a 66% increase since 2009, according to county statistics. But for much of the port’s history, its boxy, warehouse-like cruise terminals remained largely untouched — until now.

When all six projects come to be, the MacArthur Causeway that runs parallel to the port will have a front row seat to what architecture critic Alastair Gordon calls a “fashion runway.”

“You look across that narrow channel to the PortMiami and it’s like a great show,” he said. “For an architecture lover, it really is a spectacle.”

Driving around Dodge Island today is a trip through the port’s history. The port offices, where Kuryla goes to work, are located in 1960s-era tan-and-blue building, a throwback to the earliest days of Miami cruising. Stones dug out of the sea during the channel’s first dredges cover the facade.

The existing terminals aren’t eye sores, but they aren’t much to look at either. The relatively windowless, squat buildings serve their purpose to check in cruisers and hold them while they wait to board, but not much else.

Then came Terminal A, the dramatic new terminal from Royal Caribbean Cruises Ltd. that opened in 2018 at a cost of $266 million. Its glass triangular facade faces the MacArthur Causeway. At night, its bronze indoor propellers hoisted 90 feet into the air can be seen spinning all the way from the expressway.

Richard Fain, chairman and CEO, said the company opted for the new terminal to improve the guest experience. In addition to the architecture, the terminal is equipped with facial recognition and automated baggage screening — two technologies that speed up security.

The company also viewed the new terminal as an opportunity to showcase the port’s importance and create something that would be a “more attractive addition to the skyline of Miami.”

“The architectural resurgence of PortMiami helps people appreciate its economic contributions.,” Fain said. “I think people value beauty; that’s part of the mystique of Miami. We can be a small part of that.”

That is exactly what has happened. Miami-Dade has since approved terminal developments for MSC Cruises, Carnival Corporation, Norwegian Cruise Line Holdings Ltd., and Virgin Voyages at PortMiami, along with headquarter offices for MSC and Royal Caribbean. All approved designs push the limits of utilitarian architecture, creating a line of distinguished buildings on downtown Miami’s doorstep. All structures have to be certified as silver by the Leadership in Energy and Environmental Design program.

Next door to Terminal A is the new Norwegian Cruise Line terminal, Terminal B, scheduled to be completed in June 2020. The curves of its unique oval shape, already visible, contrast its neighbor’s sharp angles. Both terminals are transparent with floor to ceiling windows. Designed by Miami firm Bermello Ajamil & Partners, the estimated cost of the terminal is $263 million.

On the other side of Terminal A, to the east, is the plot of land designated for the largest cruise project, the MSC Cruises terminal and offices. When it is completed in October 2022, the sleek new building will hold the company’s North American headquarters and will be large enough to accommodate two of its upcoming 7,000-passenger, LNG-fueled ships at once.

The company needed a larger, more tech-advanced structure to allow for the movement of so many passengers at one time, said president of MSC Cruises USA Roberto Fusaro.

Following the trend of its neighbors, the wing-shaped MSC structure, designed by Miami-based Arquitectonica, will feature floor-to-ceiling windows. The estimated cost of the project is more than $300 million.

To the west, existing Terminal F will undergo a $195 million makeover to look more like its incoming neighbors and to accommodate Carnival Corporation’s new liquefied natural gas-powered ships set to arrive by 2022. The terminal’s new facade, designed by Miami-based Berenblum Busch Architects, will shine with LED lights illuminating the company’s signature red and blue colors at night. Terminal F will be Carnival’s largest terminal in North America.

Tucked in between the bridge to the port and the main cruise pier facing downtown will be Virgin Voyages’ new terminal, dubbed Terminal V, scheduled for completion in 2021 and designed by Arquitectonica. The $179 million building is meant to evoke vacation before passengers even board the ship with its palm canopy-inspired roof.

Across the bridge on the south side of the port, Royal Caribbean has already broken ground on new headquarter offices that will nearly double the company’s Miami workforce capacity. New York architect Kenneth Drucker of HOK said the building is designed to look like a ship, with bands of unique floor plates separating floor-to-ceiling windows. The office expansion, which includes a garage, is expected to cost $300 million. It is due for completion in 2021.

Together the six new and re-imagined buildings will change the Miami skyline, adding a new row of architecture that wasn’t there before.

“These buildings are very visible. They are in the open field of the ocean and the port,” said Fort-Brescia. “They have greater significance. They are almost like an exposition, presenting themselves to the public.”

PRIVATE DOLLARS
The wave of new development marks a change in the way port improvements are funded and guarantees an influx of private cruise line dollars to Miami-Dade county over the next several decades. The county is spending more than $700 million and expects to get back $5.8 billion over the course of the decades-long deals.

“Up until 2017, every dollar that was invested into the port really was all port dollars, all county dollars,” said Kuryla. “Now we have an incredible amount of investment by the private sector, by the private cruise lines.”

There are two types of deals the county struck with the cruise companies: rent deals and surcharge deals.

The county agreed to pay for small infrastructure improvements for the MSC and Royal Caribbean projects, but otherwise, the developments are completely funded by the cruise companies, which operate the facilities.

The county agreed to fund the Norwegian Cruise Line, Carnival Corporation and Virgin Voyages terminals for more than $600 million with the guarantee that the companies will pay them back to the tune of $3.2 billion using passenger fees over three decades.

All of this investment has put the port about $1.1 billion in debt, a level Kuryla is comfortable with. He called the deals “iron clad.”

“The idea that to build a terminal that’s beyond a box, it costs more money,” said Kuryla. “It is something that is very good for [the cruise lines.] And it’s also definitely very, very good for us.”

By 2022 PortMiami will be totally transformed. Still, it will continue to lag other ports when it comes to shore power. Shore power, or cold ironing, reduces emissions by allowing ships to plug in to a local electrical grid and turn off their engines instead of idling while in port.

In 2011, PortMiami listed shore power in its “2035 Master Plan” as a potential sustainability project, aimed at preserving the natural and human environments surrounding the port. Even with the current unprecedented investment in cruise terminals, no progress has been made on this initiative. Kuryla said it did not come up in any of the county’s conversations with cruise companies about the terminal deals.

“This is something that I think if the client were to have expressed that need as part of any of the development project that we’re doing, we would have for sure entertained it and costed it out,” Kuryla said. “But it just didn’t it didn’t come up.”

A 2015 study by researchers at Carnegie Mellon and the University of Delaware found that using shore power can save communities millions in public health costs.